To steal a phrase, “I was indexing when indexing wasn’t cool.” 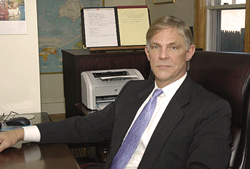 I went into business school with the idea of learning how to become a stock picker. What I learned was the discouraging reality that out of the thousands of investment managers who have track records long enough to eliminate luck, there are only a hand full or so who have demonstrated an ability to add value through trading strategies. All of the others’ efforts simply detract from return. At that same time I was exposed to the scientific concepts of Modern Portfolio Theory. This approach seemed so much more litgitimate. It was based on measurable data rather that theoretical trading strategies that didn’t hold up to statistical scrutiny. However, at that point MPT was mostly being implemented with individual securities and the results were mixed.

After completing my MBA I began studying why MPT concepts were more effectively applied using diversified index investment vehicles. However, the problem at that time was that individual investors really couldn’t follow this strategy because they had access to only a limited variety of index funds. Basically there were S&P 500 index funds and one or two others. Proper asset class diversification required a more diverse set of index investment to select from. At the same time pension funds, with their large amounts of money, had the ability to create their own index investment vehicles. As such, an increasing number of them were employing indexing strategies to one degree or another.

One of the first things I did after starting my investment counseling practice was to write a paper describing the investment strategy I would employ and demonstrating its validity. The result was, “The Role of Index Funds in Developing an Optimal Investment Strategy.” Shortly after its publication an advisor from New York called saying that he agreed with my paper and asked if I was aware of Dimensional Fund Advisors. I was not. But, what I was about to discover has been a significant piece of my business ever since. DFA is a company founded in 1981 by some of the most advanced people in financial academia. It mission was to offering research-based “asset class” investment products to pension funds. Not long before I was made aware of them in the mid-1990s they began approving individual investment advisors to use their investment products. Here was a company that was solving the problem of the insufficient index-like investment products. The portfolio building tools that were previously only unavailable to pension funds were now available through DFA to advisors like me who worked with individual investors. Over the years, I have developed an increasing respect for DFA and I utilize their investment products quite extensively. Since the early 1990s I’ve been continually refining my strategy, but the basic fundamentals have proven to be sound. While a little old, the two papers below still do a pretty good job of describing the foundation of the investment approach employed by LCM.

How Can We Help You?